The Apostles’ Creed has its origin in what has been called “The Old Roman Creed” and has been attested to in documents as early as the 2nd century AD. St. Ambrose called it the Apostles Creed in the late 4th century, and it has been known by that title ever since. The Creed in its present form dates to the 9th century when the Emperor Charlemagne adopted it and made it the standard profession of faith for the western Catholic Church.

The Creed gives us all the essential Catholic doctrines in one short prayer: the Blessed Trinity, the divinity of Christ and the Holy Spirit, the Virgin Birth, the Resurrection and Ascension of Jesus, as well as statements of our belief in the Church, the saints, the forgiveness of sins, and Heaven and Hell.

The Apostles’ Creed is the shorter of two ancient creeds that have come down to us through history. The other is the Nicene Creed that we recite at Mass. The Apostles Creed is commonly used to begin the Rosary and the Divine Mercy Chaplet.

I believe in God, the Father Almighty,
Creator of Heaven and earth.
and in Jesus Christ, His only Son, Our Lord,
Who was conceived by the Holy Spirit,
born of the Virgin Mary,
suffered under Pontius Pilate,
was crucified, died, and was buried;
He descended into Hell.
The third day He rose from the dead;
He ascended into Heaven,
and seated at the right hand of God, the Father Almighty;
from thence He shall come to judge the living and the dead.
I believe in the Holy Spirit,
the holy Catholic Church,
the communion of saints,
the forgiveness of sins,
the resurrection of the body,
and life everlasting. Amen. 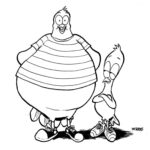